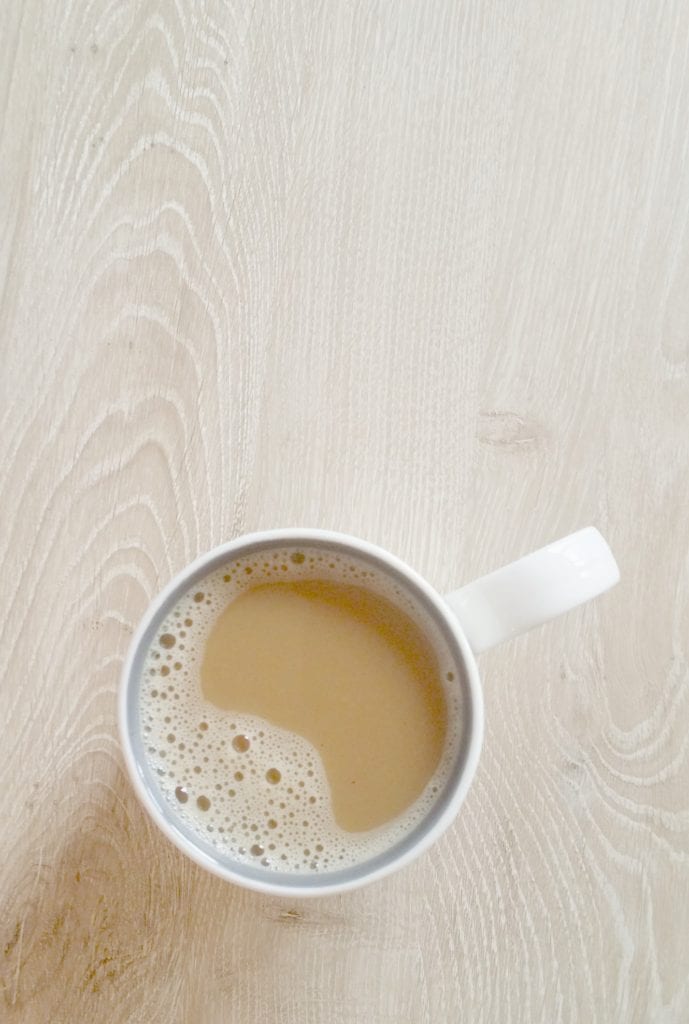 So I didn’t consume ANY caffeine for 12 days straight, zero, zilch, nada! I was going to go without it for about a month, I’m not even sure why, I guess I wanted to reset my body and try something new for energy. By new I mean wheatgrass pills every morning, which I’m still taking daily. I guess I wanted to see if I could obtain energy from a more natural source that has fewer side effects.

I generally was drinking about 200-250 mg of caffeine per day, lower than the average American. I would drink a cup of Lavazza coffee with breakfast and then a serving of Optimum Nutrition Amino Energy (BCAAs) before noon, sometimes later. Honestly, I don’t get that much energy from drinking coffee or the BCAAs, I’m pretty tired all the time which is frustrating. I genuinely enjoy the taste of coffee and the BCAAs.

Coffee is comforting. I like to drink it while I read in the morning or do some work. I enjoy it with Califia Farms Almond Milk Creamer in Pecan Caramel, it’s thick and delicious!!

The BCAAs are also something I look forward to drinking, they’re sweet so it helps with my sugar cravings. There are tons of flavors (my favorites are Fruit fusion, Watermelon, and Blueberry Mojito), and BCAAs are important for me to drink for muscle recovery considering all the weight training I do.

I know I’m not addicted to caffeine like many people are. Caffeine is a drug. I don’t NEED caffeine to function, and I didn’t have any withdrawal symptoms when I stopped consuming it. However, I just wanted to enjoy my cup of coffee and my aminos. There also really is no point in removing caffeine from my diet for 30 days, if I plan on going right back to it after, so I drank a yummy cup this morning while I did some Master’s work!

I’ve been doing some research on caffeine though, so I figured I would share it in case anyone is on the fence about caffeine. I know some people don’t drink any caffeine at all and they feel so much better, but obviously that’s not for everyone. I am also trying to pull my information from scientific studies and journals. Not just any article written by some man in New York. I’m not going to go into any crazy scientific detail, but I wanted to find information that is more reliable. I guess my 5 years as a biology student paid off a bit?

It was hard to find reputable statistics on caffeine, most of the stuff out there only represents coffee, but here is what I found:

If you want to find other cool facts and statistics, just search caffeine statistics on Pinterest and a bunch of cute infographics will appear!

The information below is pulled from scientific published articles and journals (referenced below if interested). Information about caffeine consumption is really varied and it seems difficult to study. Many studies mentioned that it’s hard to measure caffeine consumption (from coffee), because the same type of coffee can produce different amounts of caffeine depending on the origin of the bean, the type, temperature, and time of brewing/steeping. It’s also difficult to assume that only part of an individuals diet is responsible for health benefits or adverse effects.

To read more on the benefits of coffee check out this post written by Callum over at TheHospitalityGuy.com.au!

My Opinion on Caffeine Consumption

I’m sure that 0 caffeine consumption is probably the safest route to take, however, like I said before I enjoy my caffeinated beverages. I rarely, if ever drink more than 2 cups of coffee per day, so I know I won’t get addicted or consume levels that will start to take a toll on my body. I never, ever drink energy drinks/shots such as Red Bull and Monster, in my opinion those are the worst. I also never drink soda, there is absolutely no benefit from drinking those (high sugar, carbonation, and teeth rotting are not my cup of tea!). The studies about the adverse health effects and even the benefits of caffeine are iffy, it’s kind of like the brown rice vs. white rice debate. It’s not like cigarettes or heroin where DUH they’re bad for you.

With that being said, I am going to enjoy my 200 or so mg of caffeine per day, and not stress about it. It’s something I enjoy and I don’t have any health problems that could be affected by caffeine.

If you’re not sure about your caffeine consumption, do your own research and definitely talk to your doctor! Try weighing out the pros and cons, and if you think you’re addicted maybe try reducing the amount you consume so you don’t rely on it so much!

ANOTHER IMPORTANT THING TO NOTE!!

Many people consume coffee in a really unhealthy way by adding high-sugar creamer/syrup and other artificial sweeteners. Consuming these unhealthy versions of coffee on a daily basis is a whole different story, and will likely cause other health problems. Black is probably the best, but it’s not the most appealing, but for you Starbucks goers…have you ever checked the calories, fat, and sugar contents of your favorite beverage?? They’re usually LOADED with all three, check out the screenshot below of a Coffee Frappuccino. 50, I repeat 50 GRAMS OF SUGAR, the recommended amount of daily added sugar consumption is about 28 g for women. Watch out for those numbers, you’ll end up wasting a ton of calories on a drink and you’re probably sabotaging your diet and/or body. If you make your own coffee, watch out for those creamers too. When I order from a coffee shop I opt for an Iced Americano (15 calories, 0 g of fat and sugar) with sugar free caramel and almond milk (unsweetened if they have it). Or I’ll just order an Iced Americano and add my own creamer to it!

Have you ever given up caffeine cold turkey? Did you experience any withdrawals? What is your opinion on caffeine consumption?

Dodd, FL., DO Kennedy, LM Riby, CF Haskell-Ramsay. 2015. A double-blind, placebo-controlled study evaluating the effects of caffeine and L-theanine both alone and in combination on cerebral blood flow, cognition and mood. Psychopharmacology. 232: 2563-2576

Mayo Clinic Women’s Health Source. 2007. Coffee, Is it Good or Bad for You? Mayo Foundation for Medical Education & Research.

Ralph, Annaketurah. 2015. Development of the Effects of Caffeine Use Scale: A Pilot Study. Journal of the Australia and New Zealand Student Services Association. 45.

Schardt, David. 2008. Caffeine, The good, the bad, and the maybe. Nutrition Action Healthletter.

This blog post contains Amazon Associated links.
If you follow those links and purchase the product I make a small profit.
Thank you for the support!