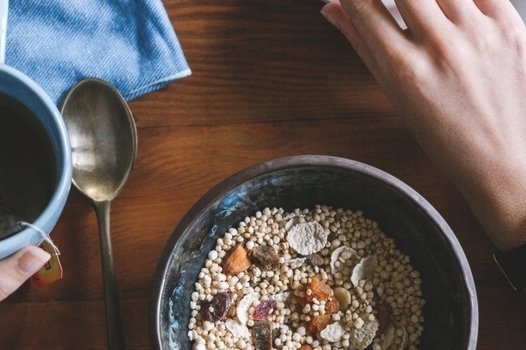 Thinking of going vegan? Know a vegan? There may be some confusion about a few things so I thought of some common misconceptions that us vegans deal with!

I love this claim because I’m living proof that can shut it down. I’ve gained the most muscle and have looked the best as a vegan. I don’t count how much protein I consume and I rarely supplement with shakes/bars. I eat. I lift heavy weights. I repeat. I’ve gained several pounds of lean muscle since becoming vegan and I’m still going.

As an avid “gym-goer” I know people in the fitness industry that think meat=muscle, meat=gains, meat=strength. Keep in mind, some of the world’s largest and STRONGEST animals are herbivores…gorillas, elephants, rhinos are all plant eating animals.

We won’t get enough protein

It’s typically the first question someone asks. Everyone becomes really concerned about your protein intake once they find out you don’t eat meat. I’m not sure when or where the numbers came about for how much protein we need to consume per day, but it’s definitely a false claim. We DON’T need to eat 1 gram of protein per pound of body weight and we CAN get plenty of protein from consuming planted based foods.

This misconception is why people fail at going vegan or even vegetarian. There’s SO much food to eat as a vegan. Everything has a vegan alternative or you can definitely turn any dish vegan. If you ONLY eat fruits and vegetables then yes you’re likely going to feel like crap. Unless you want to be a raw vegan (which is a much more extreme diet), then your diet should consist of a lot more than fruits and veggies.

Honestly, it amazes me how ignorant some people are to the abundance of food available to us. I think a lot of people are so used to just getting fast food and microwavable food that they don’t realize the whole foods that readily grow. So yes of course most of us vegans eat a bunch of fruits and vegetables but there’s rice, beans, lentils, quinoa, veggie meat, etc. All of which have multiple varieties each with unique flavors and health benefits!

Just because we’re vegan doesn’t mean we have hairy arm pits and speak to grass. It also doesn’t mean we yell at people who eat meat or tell them they’re awful humans. Yes, there are some extremists out there that bash meat eaters, but most of us choose not to be that way. Those people give vegans a bad rep. Of course if someone is interested in a vegan lifestyle I’m all about it and I’ll do what I can to help, but I can’t force people to think or be like I do.

Duh I want everyone to be vegan and care about the planet, but that’s not how life works. I don’t disrespect other people, so please don’t disrespect a vegan by shoving a fork full of steak in their face or by mocking them with “mmm meat.” It’s not funny.

We can’t eat at restaurants

Going out to eat can be quite difficult for vegans, however, MOST restaurants have something we can enjoy. For example, french fries are typically vegan, most breads are vegan, pasta is an easy choice, or we can ask to hold on the cheese or whatever it may be.

I definitely don’t make a big deal about being at a place I can’t eat anything, that sometimes is just what ends up happening. I don’t like to make other people feel bad about it.

Going vegan can definitely be expensive, but it 100% doesn’t have to be. The vegan staples (rice, lentils, beans, frozen veggies, etc.) are incredibly inexpensive. Once you get a hang of it, grocery shopping is a breeze.

To save money try sticking to a whole food plant-based diet, buy in bulk, buy frozen instead of fresh, and know where to shop for the best prices.

We’re going to be deficient in vitamins, minerals, and nutrients

Nope, nope, and nope. Again, non-vegans love to make a huge deal about our nutrients yet they eat McDonalds daily and haven’t eaten a vegetable in 2 weeks. If you’re eating a healthy diet with foods naturally rich in vitamins, you’re probably perfectly okay. Personally, I take a multivitamin daily (which contains Vitamin D and B12 + several other important minerals), probiotics daily, and an extra dose of Vitamin D and B-12 once a week. Read more about the vitamins I take here.

In addition to a balanced diet it’s important to get a blood test every so often to see where your levels stand. That way you can keep track of which vitamins/minerals you may need a supplement for or which ones you’re having trouble absorbing.

If you have any other questions or are thinking about adopting a vegan lifestyle, reach out to me!!