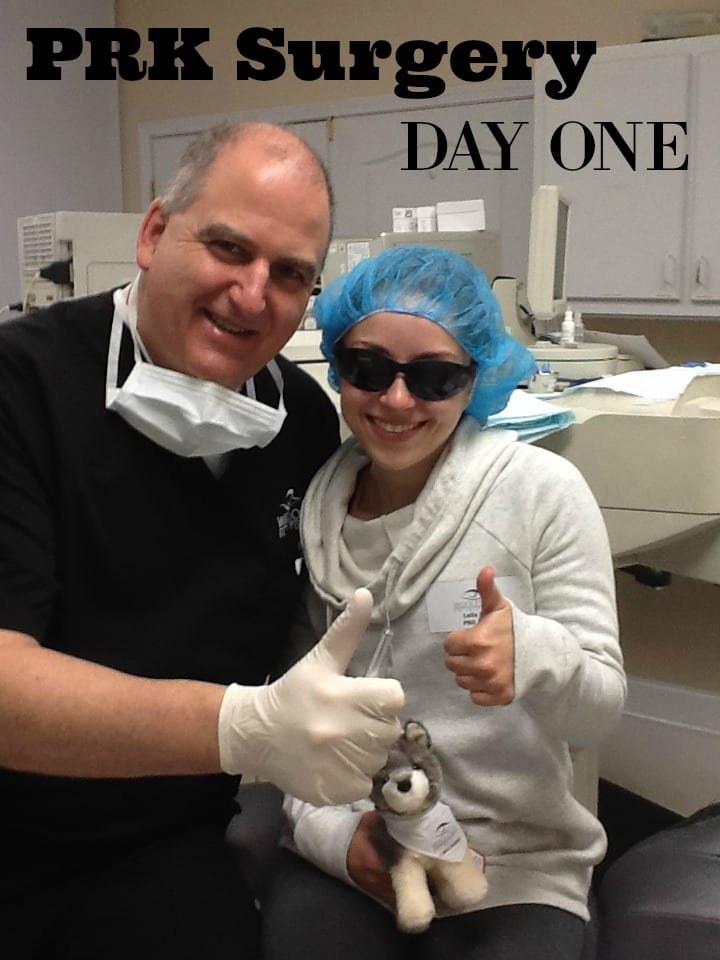 I am writing this a few days after the actual surgery day, I wanted to give my eyes plenty of rest.

Some advice for BEFORE surgery day. Pick up your prescription eyedrops a few days in advance. I dropped off the prescription the day before (in a rush), and after about 20 minutes of waiting, the pharmacist told me that one would cost $130 and the other $158. WHAT!?! I was prescribed Besivance (an antibiotic drop) and Lotemax (a steroid drop). I called the eye doctor right away and left a message for the department that could best help me. A few hours later, my pharmacist and eye doctor worked it out wonderfully. I was instead prescribed two antibiotic drops (Tobramycin and Polymyxin B Sulfate) and one steroid drop (Prednisolone). Which cost me close to $50, much better than $300!! However, I was told that the doctor would need to check my eye pressure in a couple of months because of the drop changes, I’m not exactly sure why.

Also, the doctor should write you a prescription for pain pills the day of your surgery (I got Hydrocodone), I recommend you get your driver to pick them up while you’re in the OR, so they’re ready when you’re done (you’ll thank me later).

Now, my appointment was for 7 AM. We got there at 6:45 and I signed a 6 page consent form explaining the risks and what to expect (or not expect). Almost immediately I was brought back for a few more tests. I had to stare at a few lights and tunnels while they took images, they checked my vision again, and the worst one was when they used a marker to draw dots on my eyes, I guess to observe the movements of my eyes. They used numbing drops but it was a strange sensation. Eventually I was led to a room with several chairs lined up, each with a hair net and shoe covers on the seat. I sat next to another lady, also getting PRK. A few more people came in after me and we all sat right next to each other waiting for our turn. First, the nurse put drops in my eyes, cleaned my eyelids, then put a green dot with my name on it on my forehead. She explained to all of us how and when to use the drops, and asked if we had any questions. Dr. Woolfson (the one performing all of our procedures) came in to meet us and went over what each of us were doing, and told us to look dead straight at the light no matter what. He also was there to answer anymore questions. The lady I mentioned earlier got her numbing drops in and she was taken to the OR. We could hear the laser which is quite loud, and we were told the worse your vision, the longer the laser. I was fine waiting, but my heart rate increased to maximum when I knew the other girl was done. I got my numbing drops and they told me to come on back.

I sat on the chair, laid back, and the procedure quickly began. He taped my right eyelid back, then used the clamp to open my eye wide, it didn’t hurt, but it wasn’t very comfortable. I stared at the light as best as I could, trying not to think about it too much. I could see him scrape things across my eye. The easiest time for me to focus on the light was when everything was blurry, I felt strangely calm at those moments (they didn’t last long though). He kept telling me to keep my chin up and to breathe normal, I’m sure he could tell I was holding my breath half the time. He told me to stay looking at the light, then the laser came on for several seconds. It wasn’t that difficult, it smelt like drilling teeth though. The worst part of all was the ice cold drops at the end. It was like a eye/brain freeze that would cause my eyes to roll back (and obviously not focus on the light). It was probably like 3 minutes max, then he did the same thing on my left eye. We talked about school and why I chose to get surgery now, which helped distract me a bit. At the very end he put LOTS of ice cold drops which I told him were horrible. He said a lot of people think it feels good! They gave me sunglasses and I sat up!

I could see clearer already! We took a picture together, talked about Iranian food and culture for a couple seconds, then I sat right outside the door. The numbing soon wore off and my eyes were BURN-ING. My eyes would not stop crying and I couldn’t even open them. The nurse gave me more numbing drops just so she could check my eyes again, but it barely helped. About 10 minutes later I was good to leave. I rushed my boyfriend out of there so we could go down the street and pick up my prescription, I was in pretty bad pain. I definitely would have sent him to pick them up earlier, because I had to wait 25 MINUTES in pain. I sat with my eyes clenched shut and a folder over my face. I took the pill, we got home and I finally got to my room. My boyfriend put in all three drops for me, and I fell asleep for a few hours. The doctor also gave me nausea medication and something to help with sleep, I took those before my nap. I woke up to eat my cold breakfast, then went back to sleep!

I did absolutely nothing this day. I ate a small dinner took another pain killer, and slept all night. This was definitely the worst of the pain, which lasted less than an hour after surgery, so not bad at all. I could see better than before, but it was defnitely hazy.